While Gustave Den Duyts came from an art-loving family, he did not attend an academy. Thus, he debuted in 1874 as autodidact at the Ghent exhibition, the place where Emile Claus also paid his call on the public. The artist was close to Jean Delvin, the director of the local Academy for the Fine Arts; together they rented an atelier on Drabstraat in Ghent. Together with Delvin and etcher Armand Heins, who would later also draw in Deurle and Sint-Martens-Latem, he was one of the protagonists of artistic life in Ghent during the 1870s. Den Duyts had an excellent international focus, and this attitude brought him success early on. In contrast to this foreign success, stood the conservative climate of his native city. Den Duyts felt misunderstood in Ghent to such an extent that he settled in Brussels in 1887: an unexpected step for a man who played a prominent role in the local artistic life. In Ghent, he gained fame among others from his inspired work in the design of historical processions. While Den Duyts was primarily famous as painter, already early in his career he also enjoyed fame as etcher. Den Duyts would be a significant influence on later generations of artists. Among others, his panoramic view of the city of Ghent, purchased in 1881 by the Ghent Museum for the Fine Arts, had a tremendous influence on artists like Albert Baertsoen and Georges Buysse. Consumption of the lungs, an illness that tormented him from 1883 onward, accelerated his death in 1897. There can be no doubt, however, concerning his influence in Ghent. The following generation no doubt studied the oeuvre of the first impressionist of the Leie region. 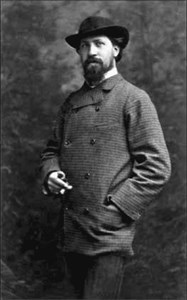 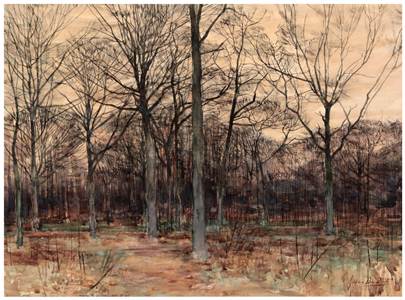