Yvonne Serruys is born in Menen on March 26, 1873. She came to her father in touch with the artist Emile Claus. Her father, Edmond Serruys, was a textile manufacturer, a notable of the city, who had progressive politicians and artists among his friends, including Emile Claus. However, her stay at Villa Zonneschijn, around 1894-1895, marked the young girl with an indelible memory: “It remains in my life as an enlightened memory. He continued to think after me, to leave the amateurism”. But Astene was not her final destination. Claus previously seems to have played the role of mentor, with whom she could ever go (as she did later), without emphasizing this or that movement. Serruys herself confirmed that it was, driven by Claus, that she continued her training at Georges Lemmen. Or as she wrote herself: “I worked there for two years under his leadership. However, pointillism didn’t satisfy me. This process bothered me, especially when it came to representing figures. Thus I returned to my old master Claus, with whom I was painting mostly Impressionist landscapes”. And although Serruys painted, influenced by Claus, the fact remains that traces of Neo-Impressionism are more obvious in her work. A glance on her limited pictorial works reveals sufficiently that the overriding theory of pointillism befitted little to the young woman. Thematically she preferred elements from her direct environment, such as the river Lys, intimate and domestic scenes, built accordingly to classical schemes in a rigid, almost academic technique. After undertaking a tour of Italy and Greece, she exhibited for the first time her paintings in Paris at the Salon at the Parisian Gallery Barbazanges, but it was an unknown facet of the artist that garnered the success on the exhibition: modelled nude dancers. Serruys saw painting not as a final point, and it seems that she found artistic freedom in the studio of Egide Rombaux, where she was given the opportunity to train in sculpturing. Especially in the beginning Rombaux would give her his fascination about Auguste Rodin and Paolo Troubetzkoy. It was at this point that she decided to become a sculptor, a decision which led her back to Brussels where she began new studies with sculptor Égide Rombaux. In 1904 she returned to Paris where she established her own workshop. Serruys, oriented to France since her youth and would settle in Paris in 1904 where she established her own workshop. Here she might be found lodging with her brother Daniel, with whom she undertook study trips to Italy and Greece. After marrying the prominent journalist Pierre Mille, she finally moved to the City of Light in July 1909, where she continued her successful career, working on romantic-realistic works, especially inspired by the woman. Her work included 250 sculptures and over 300 pieces in glass. She received a number of public commissions, including a monument to her teacher Emile Claus in Ghent, one for Paul Cambon in Tunis, and a war memorial in her home town. The majority of her work was romantic in style, largely portraiture and nudes, but including some religious pieces. An active member of salon culture, she met her future husband Pierre Mille, writer, journalist, and diplomat, at one such gathering. They married in Menen in 1909 and for many years organised their own salons. Yvonne Serruys received public recognition for her work, receiving the Légion d'honneur in 1920 and being created an officer of the Order of Léopold in 1934. She died in Paris in 1953. Her will left many of her works to the town of Menen where they are now held by the local museum, the Stadsmuseum nl: 't Schippershof. 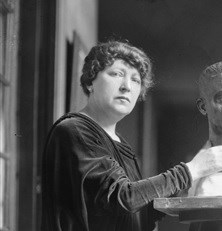