Born in Ghent, Evarist De Buck studied at the Ghent Academy for the Fine Arts between 1904 and 1914, where he had among others George Minne as instructor. His debut was also disrupted by the beginning of the First World War. Evarist De Buck took up residence in Sint-Martens-Latem only in 1917. In the same year, the zaal Taets in Ghent invited him for an individual exhibition. He in fact exhibited primarily in Ghent. He was repeatedly the guest of the local Cercle Artistique et Littéraire. He even received an individual exhibition in 1925. At the same time, he exhibited in the Galerie d’Art. Sporadic individual exhibitions in Brussels and Antwerp followed. Traumatised by the death of his son during the Second World War, he devoted his full attention to managing the art gallery that he had founded, and where he exhibited primarily his own works. Shortly before his death, the municipality of Sint-Martens-Latem honoured the artist by organising an individual exhibition of his work. He remained an outsider to the Latem scene. While he remained in the village until his death, he participated little in the local artistic life. His work does betray the influence of fellow Latem villagers, particularly Valerius De Saedeleer and Albert Servaes. 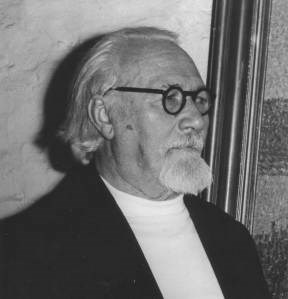