Modest Huys was confronted with painting already at a young age. As the son of a house painter, he would exercise the profession of painter and decorator until the age of thirty. Shortly before the turn of the century, he was active in the surroundings of Tiegem, and became friends with the writer Stijn Streuvels. From his debut, Huys was part of the successful luminist movement around Emile Claus. He was very active in the impressionistic association Vie et Lumière, and with the circle, he exhibited his works at La Libre Esthétique in 1906. He had exhibited a year earlier at the Antwerp modernistic association Kunst van Heden. In 1905, he confirmed his fame as luminist at the Liege World Fair. Around the same time Huys became friends with the brothers Gustave and Leon De Smet, with whom he travelled to Normandy. This Ghent connection became increasingly important. Huys was indeed a welcome guest in the city. During the course of his career, he repeatedly displayed his works at individual and group exhibitions. He made his debut in the circle together with Gustave De Smet. Huys’ Belgian success also had echoes abroad. The occasion for this was his notable presence at the Venice Biennale in 1909. The Carnegie Institute of Pittsburgh promptly decided to invite him to the annual exhibitions organised by it; important is the fact that these exhibitions toured throughout the United States. The biennale also opened the doors to the Royal Scottish Academy. In contrast to many colleagues, he spent the war years in the land of the Leie. And this voluntary exile continued after the war. In fact, Huys closed this period only in 1927 when he received his own atelier-the Zonne-Huys-on the Leie in Zulte. The artist was never part of the Brussels’ avant-garde. He was active as exhibitor in the region between Ghent and Courtrai. Somewhat lonely, Modest Huys died in his atelier in Zulte at the end of January 1932. 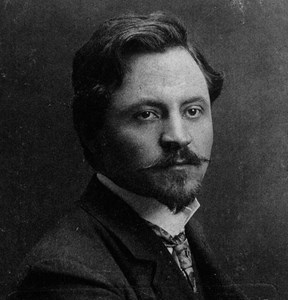