Of the famous Latem artists, Albijn (Binus) Van den Abeele was the only one who was born in the village. His social commitment prompted him already at an early age to teach his fellow villagers. He voluntarily gave lessons at the local parochial Sunday school. His ambitions, however, lay elsewhere. Already in 1859, he had a first short story published in instalments in a Ghent newspaper. In his subsequent writing, he would also criticise the social abuses present in the countryside. The concept of improving the lot of the people was never away. He also revealed himself an enthusiastic amateur historian, with his attention focused on the history of Sint-Martens-Latem and Deinze. Van den Abeele’s literary style finds its context in the romantic-realistic tradition, and in essence, he was a product of the literary revival set in motion by Hendrik Conscience. Van den Abeele was able to use his literary and historical writing to win the support of a wide circle of friends. A circle of artists had developed around Binus’ house at the Knok in Latem already in the 1860s, made up among others of the painters Xavier De Cock, Jozef Pauwels and Felix Cogen, Anna De Weert’s uncle. Already then, Van den Abeele was attracting artists to the village. In 1860 Xavier De Cock, for example, came to live at the Vierschaar in Deurle with Van den Abeele’s help. He also played an important role in village politics. Town councillor from 1863, alderman in 1867, in 1869 he became mayor of Sint-Martens-Latem, a post he held until 1876. He then unexpectedly left politics, and became town clerk of Latem and Afsnee. At approximately the same time, his first artistic ambitions began to bud. Binus had a nose for new contacts. Previously in 1883, he had become friends with Emile Claus, who only a year earlier came to reside in Astene, slightly upstream from Latem. Van den Abeele probably also introduced Xavier De Cock to Villa Sunshine, the artist’s residence. The comradeship between Van den Abeele and Claus would certainly last until 1895; together with De Cock, Claus was a witness at the marriage of Binus in 1885. After his marriage, Van den Abeele moved into a stately house on Latemstraat. Later, Van den Abeele would recoil at the international success enjoyed by Claus. Via his marriage, Claus became a de facto part of the French-speaking higher bourgeoisie, a circle that was unknown terrain to a Flemish Movement supporter like Van den Abeele. To be sure Claus also introduced friends such as Camille Lemonnier, yet, it remains striking that contact with Claus diminished as a new generation of artists trickled into Latem. It is known that Binus moved heaven and earth to entice Valerius De Saedeleer to Latem. This is all the more remarkable since De Saedeleer was undergoing an artistic crisis, and would find his way and build up considerable fame only after the turn of the century. In 1892-1893, the De Saedeleer family first lived in Afsnee, then in Sint-Martens-Latem. The restless drifter would quickly find his way back to Ghent, but in 1898 he returned again to the village, again under the influence of the town clerk. And in his wake first George Minne would follow, then Karel and Gustave van de Woestijne, and Jules de Praetere. Thus, the first Sint-Martens-Latem group took shape, under the approving eye of Albijn Van den Abeele. In fact, all of these artists had great admiration for the naive, disarming character of Binus’ paintings. They saw in his work the realisation of their search for authenticity. The painting town clerk also had a major influence on an intermediary figure such as Albert Servaes. Van den Abeele was important even to the youngest generation that gathered in the village from 1905: Gustave De Smet, Constant Permeke and Frits Van den Berghe. Later generations also fell under the spell of the artist. The young Hubert Malfait, for example, described Binus as “a great artist. He painted spruce forests through which one can walk.” Albijn Van den Abeele was certainly the patriarch of the Latem group, and remained a fascination for the successive generations of artists in the village. The beginning of the First World War constituted for Van den Abeele the end of a happy period. He had seen his friends-artists depart one by one, and now-suddenly-saw himself growing lonely in his beloved village. Albijn Van den Abeele would live to witness the armistice. On 16 November 1918, the artist died in his house on Latemstraat. 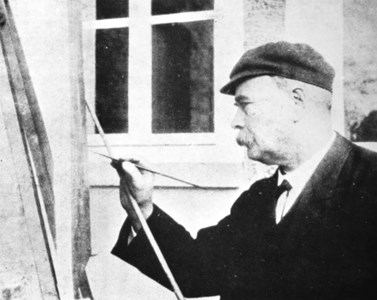