Frits Van den Berghe was born in Ghent on 3 April 1883. At that moment, his father Raphaël was secretary of the Ghent University library and his erudition was famous among the professors. Beginning in 1898, the young Frederik would perfect his skills at the Ghent Academy for the Fine Arts. His classmates included Leon De Smet and Albert Servaes, with whom he moved into an atelier on Rasphuisstraat in 1902. Already the same year he stayed in Sint-Martens-Latem, together with his bosom friend Robert Aerens. Together with Servaes, we find him again in Latem for a time in 1904. Only in 1908 would he take up residence in the village. Van den Berghe lived in the village during the summer months, spending the winters in Ghent. He was appointed professor at the academy in the same year. In the meantime, he had met Paul-Gustave van Hecke and André De Ridder in Latem, who would remain his friends for life. Shortly before the First World War, Van den Berghe underwent a crisis. Together with a girlfriend, he went to the United States. However, he returned-disappointed-after a few months. War broke out shortly thereafter, and he fled to the Netherlands together with Gustave De Smet. The Dutch painter Leo Gestel looked after his Belgian companions for a time in Amsterdam; André De Ridder also followed in his friends’ footsteps. Both De Smet and Van den Berghe were quickly noticed in the Amsterdam art world. The Larensche Art Shop showed interest in their work already in 1915. The first major exhibition of their work on foreign soil followed in May of 1916. Under the impulse of De Ridder, the Heystee, Smith & Co Gallery presented an extensive exhibition of their work. Amsterdam could not seduce them, however, and already in August, they departed for Blaricum. Still in the same year, Van den Berghe was a noted guest at an exhibition of Belgian exiles in the Amsterdam municipal museum. Afterwards, the Belgian exiles would come together in Het Gooi, and together with De Smet and Jozef Cantré, Van den Berghe formed a ‘miniature Ghent’ colony in exile. While he only returned to Belgium in 1922, Van den Berghe played a decisive role in the coming to be of the Sélection gallery. The artist was under contract to the gallery from the start of the movement in 1920; later, Walter Schwarzenberg contractually bound him to the Le Centaure gallery. After a short stay with Permeke in Ostend, in the summer of 1922 Van den Berghe went to Bachte-Maria-Leerne. One year later we find him-together with De Smet-at the Villa Malpertuis of Paul-Gustave van Hecke, a place he would regularly return to in the coming years.Le Centaure honoured him with a personal exhibition in January 1927; he was again the guest there in April of the same year. Van Hecke continued to support his disciple, among others with an individual exhibition in his Galerie L’époque in November of 1928. Even in times of crisis, Van den Berghe was supported by his Brussels’ patrons. Le Centaure organised an individual exhibition of his work again in March 1931; during the course of the year,Sélection dedicated a theme number to the artist. When his most important employers went bankrupt in 1931-1932, 10 years of history were squandered in only a few months time. The collections of De Ridder, van Hecke and Schwarzenberg, and the collections of their galleries, were auctioned off without limit. Van den Berghe-together with De Smet and Hubert Malfait-was among the worst affected. No less than one hundred and six top works by the artist were auctioned for a trifle. In fact, the conservative press used the economic crisis and the bankruptcy of the modernistic galleries to announce the end of expressionism, the prevailing movement of the 1920s. As a result, the modernists of the 1920s, with De Smet and Van den Berghe at the top of the list, suddenly fell into disfavour. Van den Berghe thus withdrew from the fickle life of an artist. To earn a living, van Hecke introduced him to the socialist publisher Het Licht in Ghent, where he was able to work as illustrator. Van den Berghe would passionately devote himself to these assignments in the coming years. Illustrative work appeared in the newspaper Vooruit; he also brought a humorous, sometimes satirical, look to leading figures in the contemporary cultural and political world in the weeklies Koekoekand Voor Allen. Van den Berghe seldom appeared in the limelight in the 1930s. In 1933, the Ghent Socialist Study Circle organised a double exhibition together with Jozef Cantré; in the same year, Emile Langui had the first monograph of the artist published. In 1936, Alice Manteau organised a small exhibition of his work. Official recognition of his work finally came in 1939, when he was nominated for the directorship of the Ghent Academy. Van den Berghe’s sudden death on 23 September of the same year made this recognition impossible. 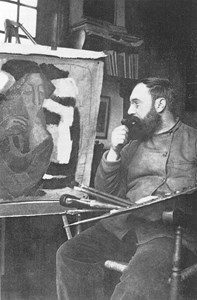 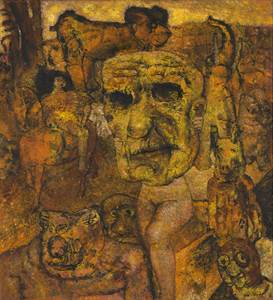 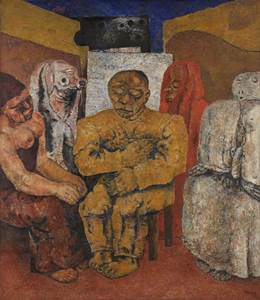 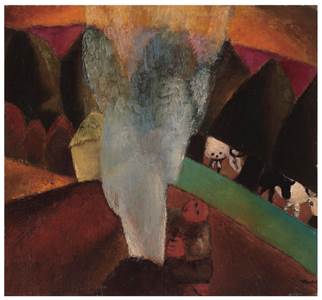 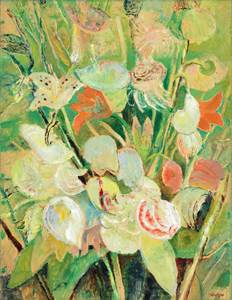