From the moment of her birth, Anne Virginie Caroline Cogen grew up in a closed middle-class milieu. Drawing and painting in watercolours were an undeniable part of this upbringing. Add to this the fact that both of her uncles, Felix and Alfons Cogen, were artists. The art-loving environment in which she grew up stimulated her in the direction of the fine arts, and already at a young age she was able to take private lessons from Ghent artists. She was also interested in literature; on her mother’s side, she was the granddaughter of Karel Lodewijk Ledeganck. In 1891, she married the Ghentian lawyer Maurice De Weert, who was also active as essayist and journalist. Later De Weert became municipal councillor and alderman of the City of Ghent. At her marriage, Anna Cogen took the name of her husband. She met Claus only after her marriage, and it would be approximately 1893 before she would follow his free lessons in Villa Zonneschijn in Astene, Claus’ country house on the Leie. From 1896, she had her own place on the Leie. The Hof ter Neuve in Afsnee was not so far removed from Ghent where she played a more mundane role as wife of the dignitary on Godshuizenstraat. De Weert was the driving force behind the creation of a luminist association. Already in 1903, together with Rodolphe Wytsman, she attempted to put together a group. However, this effort was blocked by Adrien-Joseph Heymans. George Morren had the same idea and together they succeeded in winning over Claus, Heymans and James Ensor to the idea; in 1904 the circle Vie et Lumière was a fact. She spent the war years in Ghent, in the shadow of the war. Her spouse was deported to Germany. The oppressive situation, however, did not exclude artistic progress. On the contrary, she evidenced great talent at the first individual exhibition she organised after the war. The exhibition was certainly a society event. On the evening that her exhibition opened in the Brussels Cercle Artistique et Littéraire, reporters noted among others minister Edward Anseele, Albert Baertsoen, Emile Claus and Directeur des Beaux-Arts Paul Lambotte. For the catalogue, she was able to obtain Hippolyte Fierens-Gevaert, the reputable art critic and head curator of the Brussels Royal Museums for Art and History. De Weert enjoyed presenting large ensembles. Thus in March of 1920, she displayed 77 works in Brussels; a few months later in Ghent one hundred and three paintings were exhibited. In the 1920s, De Weert was often in Rome, where for days on end she wandered through the gardens of the eternal city, around the Villa de Medici and the Vatican. After the death of her husband in 1930, De Weert increasingly withdrew from public life. She continued to regularly appear as a speaker, among others about Claus’ and her travels to the region of the Mediterranean Sea. She celebrated her final triumph in January 1938 when the art circle of her native city dedicated a large retrospective to her. After her death, she bequeathed her art collection to the city, including the famous Portrait of Anna De Weert that Emile Claus painted of her in 1899. 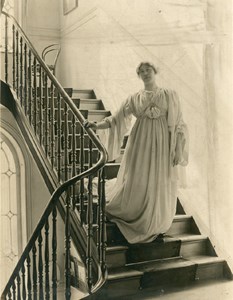 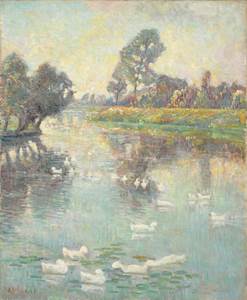 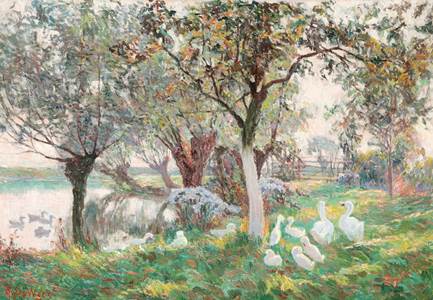