Around 1899, Albert Servaes explored the region around Sint-Martens-Latem. At that moment the sixteen-year-old travelling grocer had barely begun his profession; he preferred planting his easel in the charming landscape. In 1904, he would establish himself in the village for a long period. In Brakel he moved into a house that he shared with Frits Van den Berghe. In Latem, the atheistic Servaes suddenly had religious interests. The zealotry of the convert quickly put an end to relations with the rabid unbeliever Van den Berghe. He finally moved in with Doorke Malfait. He immediately added an atelier to the shabby house of the small farmer. Only in this simple milieu did Servaes find his niche. Around 1908 the artist met Father Jeroom, the Carmelite who would direct Servaes’ spiritual life. The penchant for mysticism was in motion; religious fanaticism had been conquered. The artist-who during the pre-war years was barely able to live off his painting-enjoyed great success during the First World War. A number of individual exhibitions were dedicated to him in and around Ghent. Success was so great that he made plans for a monumental house including atelier in Sint-Martens-Latem. In 1918, he moved into this house, which he christened ‘Torenhuis’. However, Servaes’ relations with the cleric were strained. In 1918, at the request of Father Jeroom, he designed Stations of the Cross for a monastery chapel to be built in Luithagen. The raw, coarse form language-echoes of El Greco-shocked the public and caused severe commotion in Roman Catholic milieus. Amid the mud slinging, he was invited by the avant-garde gallery Sélection for an individual exhibition; in 1921,Le Centaure would match the example set by Sélection. Father Jeroom also continued to defend his disciple. Again in 1921, he organised a travelling exhibition of the Luithagen Stations of the Cross in the Netherlands. In the same year, Servaes met his French soulmate Georges Rouault in Paris. In the later 1920s, Servaes also continued to be followed by the Brussels avant-garde circles. Together with George Minne, he exhibited at the gallery Le Centaure in November 1926. His foreign reputation also grew. In August 1929, the Amsterdam Municipal Museum organised an exhibition of his recent work; the museum would purchase the series of portraits of monks in the coming year. Servaes’ work remained popular in the Netherlands in the 1930s. But in his own country, interest also remained for his work. The opening exhibition of the new Ars gallery in Ghent was completely dedicated to his work. On the other hand, he also received support from the French Catholic side. While visiting Latem, the poet Paul Claudel was deeply impressed by Servaes’ work. In 1931, Servaes was regularly in Italy, where he visited the churches and museums of Milan, Padua, Ravenna, Verona and Venice. In the latter days of the Second World War, anonymous threats forced Servaes to flee. Via Germany, he ended up in Switzerland. The artist would die in exile at the age 83. 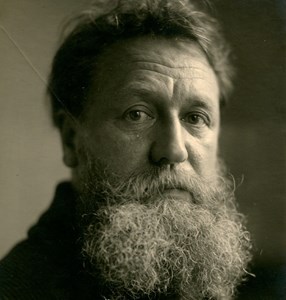