Born the son of a tailor, Xavier and his brother César underwent a difficult period after the early death of their father. He followed lessons at the academy from 1830-1835. Thanks to the financial assistance of a cloth merchant, he was then able to complete his schooling in Antwerp. He debuted at the triennial exhibition in Antwerp already in 1837. Until 1845, he repeatedly sent work to the official Belgian exhibitions. In the meantime, he had become a known figure in Ghent. In 1840, he helped establish the Kunstgenootschap, an association for the promotion of young, penniless artists. Some years later César De Cock would also become a member of the association. In 1852, Xavier, in the company of a friend, made a trip to Normandy, and via Paris ended up in Barbizon. He became acquainted with the Mélingue family, with whom he was able to move in. In no time, De Cock had integrated himself in the artistic life of Paris. Xavier certainly enjoyed success in Paris. When Xavier De Cock settled in Deurle-part of Sint-Martens-Latem-in 1860, he laid the foundations for the artists’ village. Around the same time, he became friends with Albijn Van den Abeele, the town clerk of Sint-Martens-Latem. At that moment, De Cock was a prominent painter in Belgium and abroad; thus he was received at the Paris exhibition as a celebrated landscape painter from Barbizon. De Cock probably spent the winters in Paris, but spring and summer always found him in Deurle. His French fame also spread to Belgium, and in Count Henri ‘t Kint de Roodenbeke-resident of the nearby castle of Ooidonk-he had an influential supporter of his work. After 1865, Xavier preferred Belgian artistic life and exhibited frequently at the exhibitions in Antwerp, Brussels and Ghent. Successfully, for in 1862 the Ghent Museum for the Fine Arts purchased De Meersstraatin Ghent. The woods and meadows around Ghent were an important source of studies for the artist. However, he continued to send his work to Paris, where he was represented each year at the exhibition. 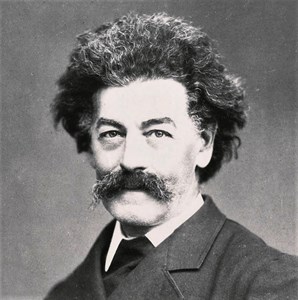 Shepherds at the farm 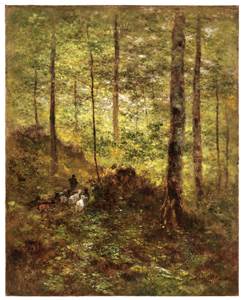 Shepherd in the forest