For the first seventeen years of her life, Jenny Montigny was subject to the typical middle-class upbringing of a moneyed milieu. She had been fascinated since childhood by art and-against the will of her father-did everything possible to achieve this goal. She discovered her great role model at the end of 1892/beginning of 1893 in the Ghent Museum for the Fine Arts: full of admiration, she stood before the painting "De IJsvogels" by Emile Claus that had just been purchased by the City. From 1895, she regularly visited Villa Zonneschijn, Claus’ atelier in Astene, to follow free lessons there. In 1904, she exchanged bourgeois Ghent for an independent, uncertain existence in Villa Rustoord in Deurle. She spent the years of the First World War in London. She was active in among others the Women’s International Art Club. The war years, however, were a financial catastrophe; back in Deurle she was forced to sell her house. A smaller house on Pontstraat in Deurle followed; she had to house her atelier on Dorpsstraat. Sint-Jozef school was nearby. Here she was able to study her favourite subject undisturbed: the romping children of Deurle. However, the financial problems continued. Claus helped her on more than one occasion; after his death, she received support from her sister. In any case, this material uncertainty indicates that there were few buyers available for her work during the interwar period. Montigny disappeared a bit from the Ghent scene in the years between the two world wars; she only sporadically took part in the exhibitions of the local Cercle Artistique et Littéraire. Repeated individual exhibitions indicate that Brussels appealed to her more. Montigny’s exhibitions attracted attention and her work was regularly well received in the press. Somewhat estranged from the artistic milieu, in 1937 she has died in her house on Pontstraat in Deurle. 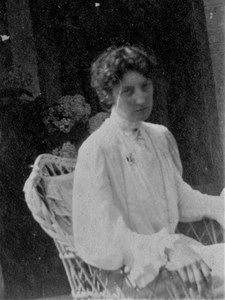 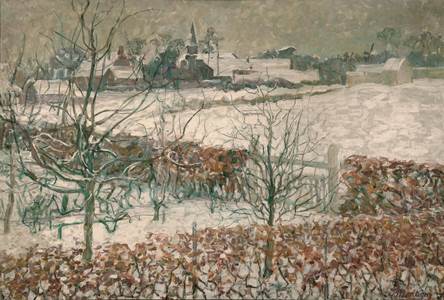 Winter in Deurle
The school yard in Deurle in spring