Around 1929, Gustave De Smet was searching for new dimensions. He made a transition to a styl which consist of a more gentle form of what he did before. Colour became more important for the artist without neclecting the form. His paintings became more delicate. He was longing for openness, he stopped with the composition of clear planes although he never lost the contemplated composition; the influences of kubism and expressionism are still visible.
In 1930 he has moved to the countryside of Deurle. The life of farmers became his main inspiration. Although Gustave De Smet had a great respect for these farmers, there was no political or social commitment. Such can be found by Van Gogh or Eugène Laermans. His main interest was abovez all the pictural order on the canvas. Potato harvest is a typical example. The farm in 'potato harvest' is probably situated in or near Deurle, the new hometown of the artist. In this painting his new interest in colours are clearly visible. He used a broad palette of earth tones; the reds, yellows, greens, blues and browns are dominant, giving the painting a warm blaze. Although Gustave De Smet changed his harsh and angular style into a milder form, this painting didn't lose the strong expressions. The form of the figures ad the labour follow the earth curves; all together comes as a whole. 'Potato harvest' has a very strong radiance which makes it an exquisite painting.

Emanuel Hoffmann (1896-1932) was a Swiss jurist and art collector and the son of Fritz Hoffmann-La Roche, a founder of the pharmaceutical company Hoffmann-La Roche (also known as Roche). He attended the humanist gymnasium in Basel, Switzerland, and studied law at the Universities of Basel and Bern. In 1921 he married Maja Stehlin. Since 1921 he worked at the families company Roche in Basel, between 1925 and 1930 he was in charge of the companies branch in Brussels, Belgium. In Belgium, he and his wife began to collect art from painters like Joan Miró, Pablo Picasso, Paul Klee, Max Ernst or Gustave De Smet. From 1932 onwards he was a vice-director at the headquarters of Roche in Basel. In 1932 he was elected the president of the Art Association of Basel. The same year, he died from a car accident.
After his death, his surviving wife Maja Hoffmann established the Emanuel Hoffmann Foundation which according to her, would continue what was important to her late husband.
You May Also Like 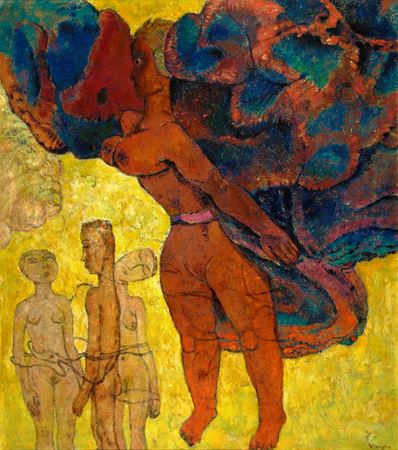