In contrast to his many Latem companions, De Sutter did not come from the bourgeoisie. Growing up in a poor working-class family in Ghent, they moved to Lochristi in 1902. There the young man grew up amid the peasant’s life. As apprentice to the Ghent photographer Isidoor Mast, he became acquainted with Sint-Martens-Latem-where the photographer had a country house-already at a young age. Thanks to Mast, he was able to follow the evening courses at the Ghent Academy for the Fine Arts. The war years scarcely disrupted this budding happiness. Already in 1918, he rented an atelier in Patershol. In the second half of the 1920s, De Sutter’s star ascended in the artistic firmament. After 1925, his work was regularly shown in the modernistic periodical Sélection. De Sutter would ultimately come in contract with the Brussels Galerie Le Centaure. In this way, he was able to find some measure of financial support until the crisis years. He was unable to match, however, the commercial success of his friend Gustave De Smet. In contrast to his friend, De Sutter would not dominate the metropolitan art scene. To be sure, he was also a guest, together with Malfait, of Le Centaure in 1928. And he received repeated invitations from Galerie Georges Giroux. But it was primarily at the local level of Ghent that he enjoyed success. Until 1929, De Sutter lived in Waregem in the Rozenhuis of the family De Sutter, where earlier Modest Huys and Gustave Van de Woestyne had also stayed. He settled in Astene in 1929. Like his friend Gustave De Smet, De Sutter was also in dire straits in the years of economic crisis. His Galerie Le Centaure went bankrupt and financial security suddenly vanished. In fact, the conservative press used the economic crisis and the bankruptcy of the modernistic galleries to announce the end of expressionism, the prevailing movement of the 1920s. Suddenly De Sutter found himself in the enemy camp. Like his fellow-artists Hubert Malfait and Frits Van den Berge, the artist was only able to survive this blow with great difficulty. From 1933, De Sutter was closely involved with the establishment and operation of the Ars art gallery in Ghent. The gallery guaranteed good sales, and brought him to the attention of collectors. He was a guest there in 1937 and 1938. Despite his support of the Catholic Ars gallery, he was also a member of the city’s Socialist Study Circle. This circle would organise an individual exhibition of his work in the reception room of the Vooruit in 1934. He would settle in Sint-Martens-Latem only in 1939. He lived in the village until his death and-together with Hubert Malfait and Albert Saverys-constituted the post-expressionist group. Official recognition only came in 1944 when he was named professor at the Ghent academy. On the other hand, the occupying German forces forbid his individual exhibition at the Ars Gallery. After the war, De Sutter took part in noteworthy exhibitions. He was even honoured at the 26th Venice Biennale in 1952. De Sutter remained on the contemporary artistic scene. A large exhibition was organised in February 1963 by the Nova Gallery in Mechelen. Then king of the art world Karel Geirlandt even spoke at the vernissage. 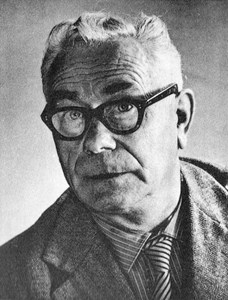 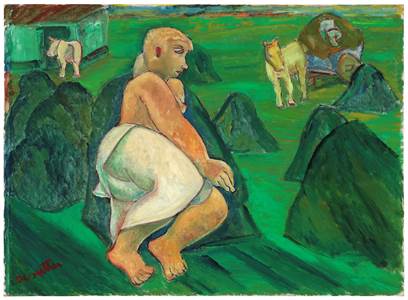